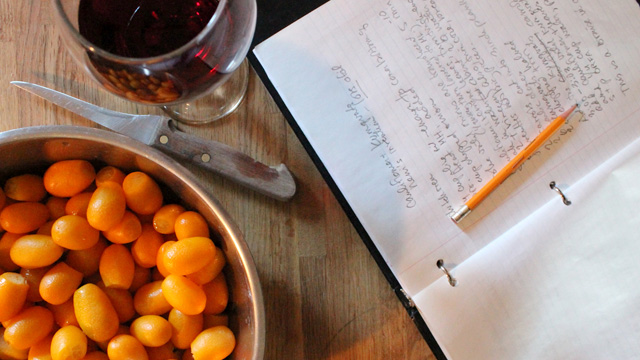 Neni’s city residence just outside of Athens sports a kumquat tree, and so over time, she learned how to prepare them. Kumquats are in season right now: late winter into early spring. They are a kind of weird little fruit, a type of citrus of Asian origin. It is grown in the southern United States, notably Florida. It’s not part of my culinary vernacular at all, but some of the most famous kumquats come from Corfu, in Greece, so clearly it is part of Neni’s. And she does do wonderful things with it. Kumquat has a sweet rind and a sour fruit, and she uses that tart and sweet quality to brighten up all kinds of dishes. She also makes kumquat spoon fruit. 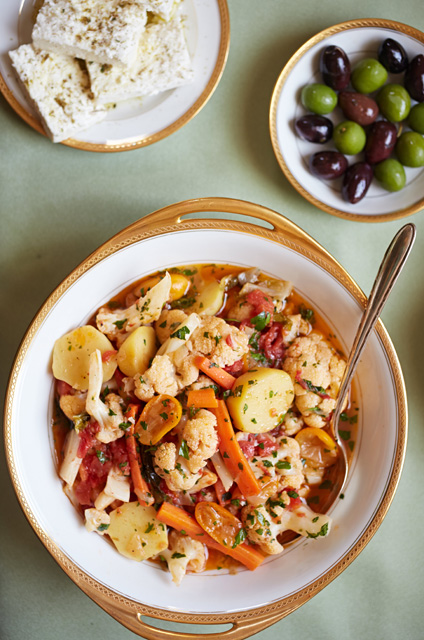 Since Neni’s son Petros has been in college, she said she and her husband Stathis eat meat less often. This vegetable dish, which is braised in oil, served with homemade bread, olives, cheese, and a dip like taramosalata, is a typical dinner for them. Neni says her late father would have put potatoes in this dish (I did, and Megan did for the photo: 6 halved tiny Yukon golds or butterballs, added at the same time as the cauliflower), but she doesn’t like braised potatoes.