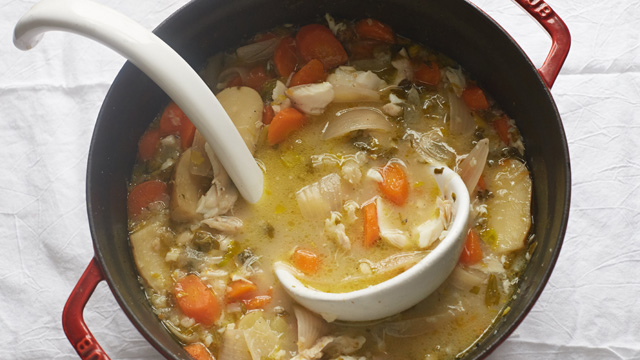 This is a sad post. In early December a beautiful young man, a schoolmate of my daughter’s, left a suicide note in his apartment. A few months later his body was found in the East River. He suffered from depression.

The young man was part Greek, and his family is friendly with Neni and her husband Stathis. Neni prepared a fish soup for the funerary meal. It is a tradition to serve this soup at funerals. As Neni explained it, the Greek acronym IXOYE stands for “Jesus Christ, Son of God, Savior.” It is also the word for fish. I read a wonderful book she wrote years ago called Fragments of Death Fables of Identity, An Athenian Anthropography (University of Wisconsin Press) that explains the symbolism of the fish “not only bonds human beings with one another through the physical act of eating together but also links the partaking human beings with their spiritual cosmos (which incorporates their dead ones) through the incorporation of a symbol of Christ into their ritual consumption of it, as it further suggests an abstracted performance of the Eucharist.”

Mourning in Greece is a 40-day cycle, and for at least the first three days, women are not expected to cook. “The assumption is the grief is so intense during the first three days of mourning that the bereaved cannot take care of themselves,” wrote Neni. There is also a sugar prohibition that extends a full year, although tea and coffee with sugar are acceptable.

I appreciate traditions that bridge the failings of language. In circumstances like these, customs unite: they bind one family’s loss with the losses other families have experienced. It is, I think, a reminder that such fates befall us all, and we are not alone.

The sugar prohibition, BTW, does not apply to a new bride (within a year of the wedding) except when the deceased is her husband.

Fish Soup
Serves 4
“It’s a “white” soup, because the funerary meal cannot include anything red. No tomatoes, no red wine. Neni thinks soup is served because “Soup feeds many people.” It’s a very comforting, simple. and heartfelt dish.

Remove the heads of the fish and place them in cheesecloth that has been secured, or a jelly bag. Place the heads in a large wide soup pot and add the water and onion and bring to a boil over a high heat. They turn down the heat and add the potatoes, carrots, celery leaves, salt and pepper to taste. Cook the soup over a medium heat for 30 minutes until the carrots are al dente. Add the fish, the olive oil and 2 tablespoons of lemon juice. Continue cooking until the fish is cooked through, about 15 minutes.

Remove the fish and vegetables. Allow the fish to cool on the bone. Add the rice and the remaining lemon juice and continue to cook the soup over a medium heat until the rice is tender, about 15 minutes. Check the seasoning.

Remove the fish from the bone and add the meat and vegetables back to the soup, or serve the soup simply with the rice, and the fish and vegetables as a second course. In which case, serve the fish with a dribble of olive oil and a few grinds of black pepper.

← The Best Braised Chicken with Lemons
Orange and Radicchio Salad →

2 Comments on “Fish Soup, For Mourning”