Stewed Monkfish with Tomatoes and Herbs 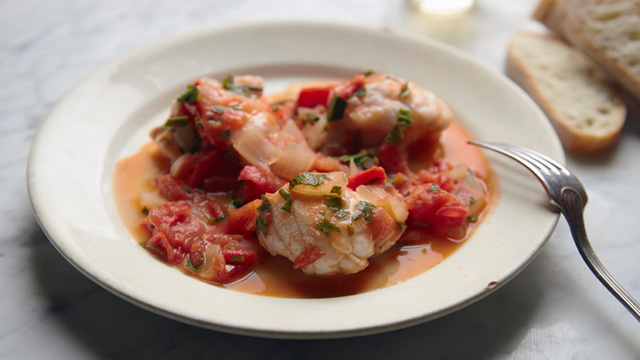 Before Edward went to Italy this fall he packed the fridge in Katonah with all kinds of foods for my mother: meatballs with peas (two packs of two servings); braised chicken with tomatoes, onions, and red peppers, for four, in case she had company; marinara sauce; pureed potato, onion, carrots, and corn soup; bean soup with beef; chicken stock, and he laid in angel hair pasta to cook in it; and stewed monkfish with tomatoes and herbs.

Twice a day I checked in with my mother, who was rattling around the big house in Westchester by herself, and twice a day she’d report she was defrosting something for lunch or dinner. There was a big piece of Gorgonzola in the fridge, and a bottle of homemade white wine, and every day she went to town to buy lettuce and bread.

That simple outing allowed for some socializing and exercise, as she drives partway to town, and then walks to and from the car. I am trying to get her to use a cane because she walks as if tossed by cosmic winds, veering from left to right to left again, but she won’t. My parents are products of their generation, which willed itself to survive first the Depression and then World War II. They’re tough and hardheaded and independent.

It makes me wonder what will characterize my generation when we are elderly? Already I am seeing the first wave of baby boomers (I am in the last—born in 1959) in retirement mode. They are forever young in their outlook, living in the moment. That’s a good thing, I guess. Though I feel a sense of foreboding, as if it is all going to come to an end, maybe soon. I can’t help but want to be prepared, and so I put up a few dishes in the freezer, too.

Heat the oil in a large sauté pan over a medium high heat. Add the tomatoes and onions and cook until the onions break down, about 8 minutes. Add the herbs, white wine and vinegar and continue cooking for about 2 minutes, until the winey smell is gone. Salt and pepper the monkfish, then add to the tomato mixture. Cover, and cook for 5 minutes until the flesh is opaque. Uncover, turn the fish over and cook for another 2 minutes.

Note: Usually monkfish is sold as a fillet, so if that is the only way you can get it, just cut the fillet into 2 to 3 inch thick slices. Otherwise, a monkfish steak has a center bone, with meat all around. It is very nice.

← The Churn, Interrupted
Pasta with Broccoli Rabe Pesto and Clams →

3 Comments on “Stewed Monkfish with Tomatoes and Herbs”