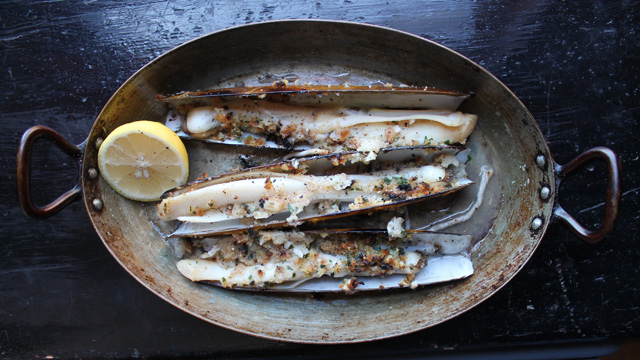 Edward brought me a gorgeous chunk of guanciale from Italy—the way to a girl’s heart–and a jar of grape molasses that he made. He reduces 36 pounds of zinfandel grapes down to about 12 half pints of thick, gooey, chocolaty, winey molasses. It is such incredible stuff. Edward adds it to the drippings of roasted meats during the holiday season and it lends an incredibly complexity of flavor. It’s too big a project unless you live in wine country. But if you do, let me know and I will talk you through the technique.

During the course of the week Edward made grilled split bass, roast poulet with potatoes and broccoli rabe, a bean and dandelion soup, poached eggs on peppers and onions, the bean and dandelion soup again, only this time with meatballs added, a boiled cuttlefish salad with tuna, tomatoes, onions and avocado (he boils the cuttlefish on Friday, mixes it with olive oil and lemon juice and refrigerates it so that he can have fish later in the week), and a baked potato with a poached egg in it, dressed with olive oil and salad, because he said he had a little stomach bug and needed gentle food, and finally, a squash soup with tubettini. His winter squash are coming in—a wonderful varietal that holds like a gourd but cooks like a zucchini, that he calls zucca. After every meal this time of year Ed and Ellie eat an apple and some nuts. Wine at lunch only, not dinner or they don’t sleep well (Ed’s swill–I think it doubles as a sterilizer for small cuts), ditto salad. Edward says raw stuff is harder to digest so he avoids it at night.

While we were in Randazzo’s fish store Edward lingered over the razor clams from Maine, as did an elderly Italian woman. He asked her if she ever cooked them, and she said yes, and gave him the recipe below. He explained that this was the best way to get recipes, from the ladies who are hanging around a particular food. And wow! The flavor is like a humongous steamer clam, tender and meaty. Three of these satisfying beauties were plenty for an entrée. 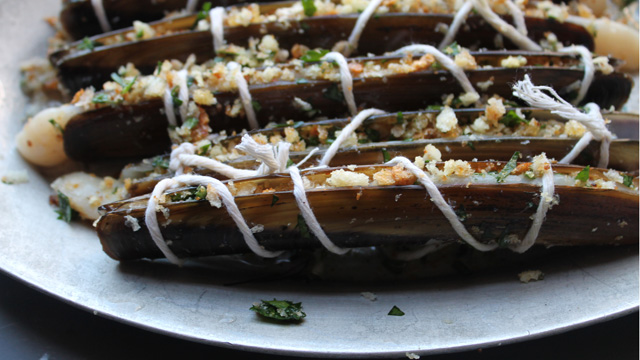 Combine breadcrumbs, parsley, olive oil, cheese if using, garlic, and salt and pepper in a small bowl. Sprinkle into the clams. Tie the clams shut with a piece of cooking twine. Place the clams on a sizzle plate or small, rimmed baking sheet and add the wine to the pan.

Place under the broiler and broil for 5 to 6 minutes under an electric broiler, less under flame, until the breadcrumbs are browned.

Remove the clams and place the sizzle plate back under the broiler and boil the juice for 3 minutes more, until it is reduced by half.

Cut the strings on the razor clams: they will pop open like a bosom that has been released from a corset. Dribble on the wine and serve right away.

← The Churn: Cabbage with Bacon and Pinoli
Enough is as Good as a Feast →