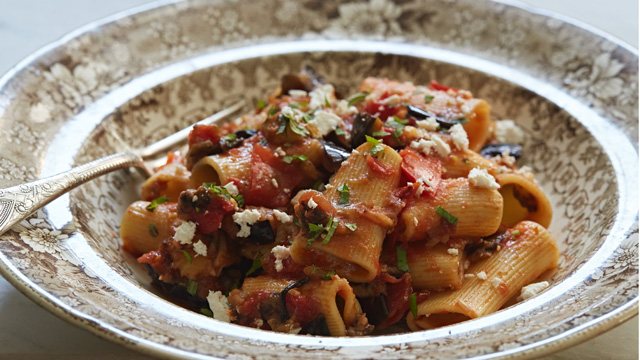 When I saw Edward on Arthur Avenue last week he was regaling a few locals about how he figured out he had Lyme disease. He’s clearly feeling better since going on the antibiotic regimen.

“I would sit down after lunch and rest a little bit, then hardly be able to get out of my chair. Or I would feel exhausted walking up the hill to my studio. I figured, well, I ‘m finally getting old. Maybe this is what old age really feels like. But then I told my doctor and he gave me the test and it came out positive for Lyme.” I glanced at our friend Rosa and we exchanged significant looks. Lyme disease should never be taken lightly but certainly not in an octogenarian.

And then came the kicker. “I was delighted!’” said Edward. “I’m not feeling my age! It’s the Lyme! I was so happy about it I made pasta alla Norma” (one of Edward’s favorites).

The technique for preparing the eggplant comes from Neni Panourgia. When I tested this I made twice as much eggplant as I needed, and the next night made her beef with eggplant. Fabulous!

Prepare the eggplant. Wash the eggplant and cut into slices about ½ inch thick (a tip: don’t remove the flower end of the eggplant, it’s delicious when cooked. Just trim its stem). Place the eggplant in a bowl filled with water and about 2 tablespoons of salt. Put a small plate over the eggplant so that it stays submerged in the water and let sit there for at least half an hour. Remove from the water, squeeze well to remove any moisture, or place on a kitchen towel to dry out some. Add ¼ cup of hot to a deep frying pan and heat over a high heat until bubbling hot. (Alternately you can drench the eggplant in oil and put it in a very hot oven to fry). Add the eggplant and let it fry until it’s nice and almost caramelized all over. Remove the eggplant from the oil and chop coarsely.

Heat the remaining 2 tablespoons of oil in a large saucepan over a medium heat. Add the garlic and hot pepper and cook for a minute or so, until you can smell the garlic, then add the tomatoes. Cover and cook over a medium low heat for about 10 minutes, until the tomatoes break up. Add the eggplant and cook a few minutes more to meld the flavors.

In the meantime, bring a large pot of salted water to a boil over a high heat. Add the rigatoni and cook until al dente, then drain. Pour the pasta into the tomato sauce and toss well. Pour into a large serving dish and add the ricotta salata and combine. Check the seasoning. Garnish with the parsley.