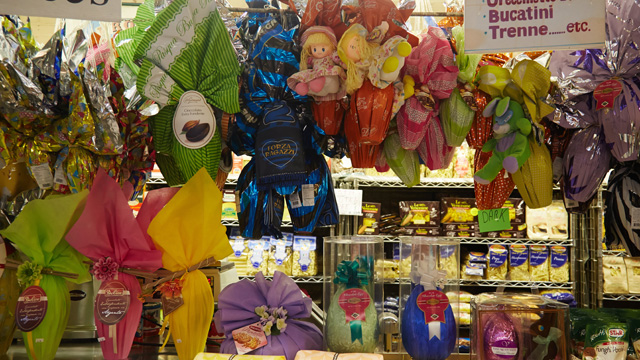 And that means it’s crazy busy in the stores. If you haven’t already ordered your baby lamb or goat, you are in trouble. Indeed, I placed an order for Neni for a 15 pound baby goat at Biancardi’s a week ago. Edward placed his order weeks in advance. He’s always been good about planning, and is such a creature of habit that as my husband says, any day of the year you can pretty much guess what Edward is doing. I worry that his sight is poor, and I always breathe a sigh of relief when I see his car in the parking lot across the street from the green market. If he doesn’t show up at Biancardi’s on Friday between 8 and 10am, then Sal calls the house.

The week of April 4, Edward ate fish and soup. Indeed, when I took my parents out to dinner at Molyvos (my 13-year-old niece, Snow Guilfoyle, sang in a Paul Simon tribute at Carnegie Hall–an interpretation of Scarborough Fair so full of young girl longing I was almost weeping–and we grabbed a bite there before the show) Ellie said she’d be glad to eat anything but fish and soup.

Ed has been eating Ling lately, a cod-like fish that is cheap, and at Randazzo’s, sold young. Delicate and similar to whiting, Edward made a stew of sweet red peppers, onions, and tomatoes, then poached the ling whole in the sauce. He also ate whiting, which he cut in half as it was big (12 inches long). The bone in a whiting is triangular and very easy to pick around, so chopping the fish doesn’t create a mess of tiny bone splinters. He steamed the whiting in white wine, garlic, and parsley, a dish that he told me the Italian ladies used to feed children when they were sick because it is so gentle on the stomach. The soft shell crabs are just beginning to come in and Edward indulged in a few, which he sautéed with garlic and parsley and hot pepper, and served with a salad and bruschetta. (I bought a dozen of them, and fried them up for a party, first dunking in milk, then in Wondra flour, and served with lemon wedges and a sauce of homemade mayonnaise combined with minced marinated cherry peppers.) He prepared brodetto (a loose fish stew) for company one evening composed of skate wing, monkfish, halved whiting, sliced cuttlefish, red pepper (though pickled peppers are preferred in the brodetto from San Benedetto, where much of his family lives in Italy), onions, and half green tomatoes.  The vegetables are cooked together, then the fish is introduced, the longest put into the vegetable stew first.

Tripe made an appearance this week, twice: boiled, and sliced and served in beef stock with cranberry beans, cabbage, and potatoes, and then again, with water added to make a tripe soup. At one point Edward couldn’t recall what he’d prepared—he writes down everything in his day book, but when he doesn’t record what he made, he usually can recall anyway, but this week he could not. When I asked him what he cooked on the 9th, he said a kale, cranberry bean, savoy cabbage, celery, and onion soup. And for dinner?  He fumbled with his glasses, pouring over his day book, then finally gave up. “Reading glasses,” he said. “I boiled them.” 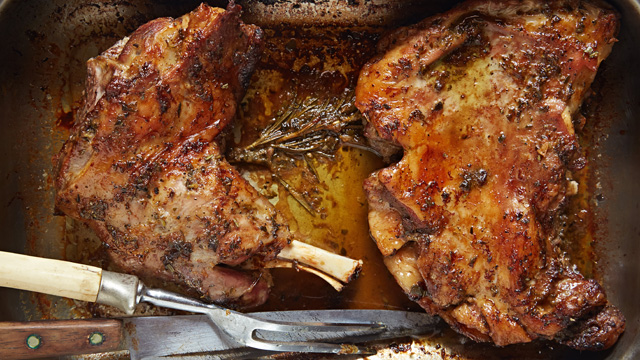 Roasted Baby Lamb
I’ve always roasted lamb the way my dad did, by browning it in a hot oven and then turning the oven down low to finish it. But often the lamb was dry. Baby lamb should be cooked through, like veal, in contrast to spring lamb (which is up to a few months older) or beef. If you undercook baby lamb it will be tough. But if you overcook, it will dry out. There’s a pretty small window of opportunity to produce the perfectly cooked baby lamb using my old technique. This technique, however, which we learned from Sal Biancardi, allows for full cooking of the lamb, but it retains its moisture beautifully. It may seem counterintuitive to slow cook, then at the end add the high heat, but take my word for it: this is the better technique.
Serves 6