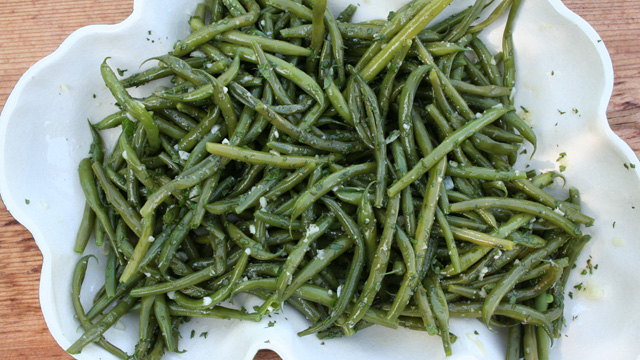 Edward turned 88 in mid-July, and of course he cooked his own dinner: stuffed clams, anchovies on toast, and champagne; risotto with zucchini flower pesto, broiled tuna (caught by a roofer/fisherman we know in Montauk) with scallion pesto, last year’s baby porcini, that we had blanched and frozen whole, skewered and broiled with the fish, and a green bean and mint salad, served with his own white wine (kind of a gut wrencher if you ask me, but he loves it). My sister Lisa made a blueberry tart studded with pastry stars. It was a warm, grateful party, but I think what was most gratifying for Edward was the fact that he is still on his game in the kitchen.

Stuffed Clams
Serves 4 as an appetizer

You can stuff oysters the same way. Mussels, too, but you have to steam them open first—opening fresh mussels is a drag.

Open the clams over a bowl to retain any spilt juices and loosen the meat in the shell. Discard the unused shells

Place the clams under the broiler and broil for a minute, until the breadcrumbs brown. Don’t walk away! They burn easily.

This pesto is good with other fish as well, both raw and cooked, as well as spooned into vegetable soups on pasta dishes. This recipe makes about 3/4 cup scallion pesto. The pesto recipe is from my forthcoming book, The Kitchen Ecosystem.

Heat the broiler to hot.

To make, the pesto, combine the scallions, pignoli nuts, garlic, olive oil, lemon juice, and salt to taste in a food processor or blender. Process to a thick sauce. I like to leave it a bit on the coarse side, but a smooth puree is nice too. 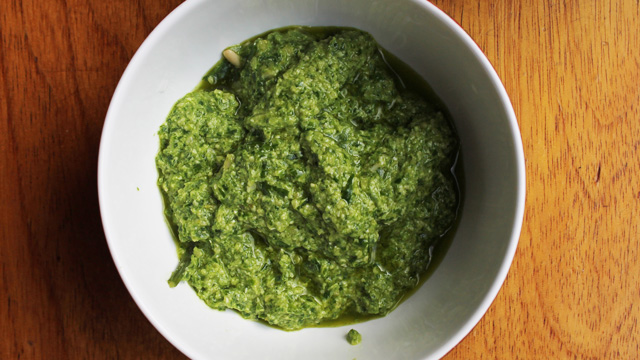 Place the tuna on a broiling pan and place under the broiler. Cook until golden on top and just opaque inside, a few minutes.

Serve the tuna with scallion pesto.

Edward usually makes this dish about an hour before eating.

Bring a large pot of water to a boil over a high heat. Add the beans and boil them until they are bright green and tender, but still snappy, about 5 minutes. Drain the beans and run them under cold water to stop the cooking.

Toss the beans in a big serving bowl with 1/4 cup of mint, the olive oil, garlic, lemon juice, and salt and pepper. When ready to serve, toss in the last 1/4 cup of mint (to be sure to have some perky-looking herbs on the plate).