Neni’s mother used to sun dry her tomato paste on their roof in Athens. Back then, the humidity in Athens was 15.9%. (It’s 37% now, says Neni, because of the excessive use of air conditioning in the city.) Neni’s mother had an interesting technique. She poured a ¼ inch layer of salt in a large tray, covered the salt with cheese cloth, then put down a 1 ½ inch layer of tomato puree. She sprinkled salt on top, then covered the puree with tulle to keep the insects off. The puree spent 3 days on the roof, and it was Neni’s job as a little girl to cover the tray at night with a linen sheet. “When I would go to check on the paste I’d take little tastes. The first day I could run my finger through, and then shake the pan so the puree equalized, but by the second and third days the paste was too dry. It was obvious I was eating it.” Neni grinned. “And it got me spanked.” When I mentioned this technique (the drying not the spanking) to my dad, he said that his relatives in Le Marche made tomato paste in a similar way, except they spread the paste out on terracotta tiles to dry.

The ratio of tomatoes to tomato paste cooked in a low oven is pretty shocking, but here’s the benefit: The paste is so incredibly rich and dense that you only need a tablespoon to flavor a dish for four. And the particular taste of tomato paste really can’t be replaced with canned tomatoes, nor does commercial paste achieve that incredibly sweet, salty, tomatoey flavor. It’s worth doing if you are inundated with tomatoes, or if they are cheap at the farmer’s market, like now, when farmer’s are trying to move those seconds! There are a million uses for tomato paste, but I think the most surprising I’ve encountered is when Neni made me a tomato paste and feta cheese sandwich on her homemade bread. As is so often the case with simple things, it was the best. 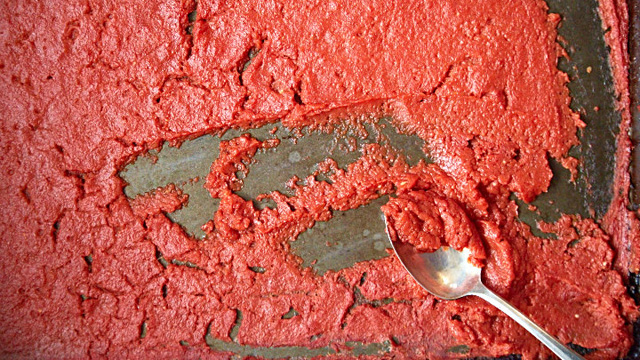 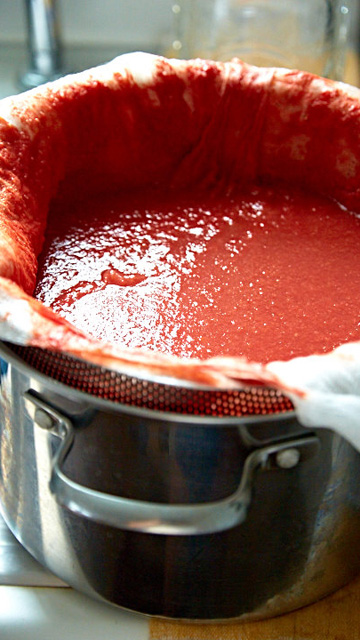 Line a large sieve with a piece of cheesecloth and place over a bowl. Pour the puree in. You do this in order to drain as much water off the puree as possible (to speed up the cooking process). Let the puree drain for about 45 minutes. The tomatoey water is delicious and should be retained to drink or use as a poaching liquid. Depending on the juiciness of the tomatoes, the puree will reduce by almost a third.

In a large baking tray at least 1 inch deep sprinkle 1 tablespoon of the salt. Pour the puree into the tray, smoothing it with a spatula. Sprinkle the remaining tablespoon of salt over the puree.

The paste will be much reduced and a very dark red. Scrape it up and pack into sterilized jars (to sterilize, boil the jars and lids in water for 10 minutes at sea level, adding 1 minute for every 1000 feet of altitude). Cover the jars with a layer of olive oil and refrigerate. The past holds for a year if it stays covered in oil.

3 Comments on “It’s now or next year…Tomato Paste”