I’ve come to appreciate that asking for stories is no way to get them. Nonetheless, it’s funny what triggers a story from Edward. At Tino’s, over our coffees, I showed Edward some pictures my son Mo had sent of himself in college—typical silly young male stuff, that I knew would please the old man. But it made him think of his father, Achilles, who worked in the coalmines in Jessup, Pennsylvania during World War 1. “He spent 6 days and nights straight in the mines, and then on the 7th day he’d come up and it would be dark. He did this for 15 years.” As a child, Edward became fascinated with this life in the dark. There weren’t children’s books or TV in the Giobbi household, only stories by the stove. “Pop told us a story about how the miners had found alligator bones made of coal, way, way down in the mine. This was so mysterious to me. Forget Hansel and Gretel! That was nothing compared to what I imagined, of giant coal alligators living in the bottom of the mines.”

Edward is in major clean out the freezer mode. This is the case every early spring, before his full embrace of spring vegetables happens. The last of the frozen cranberry beans are thrown in to a bean and broccoli rabe soup (there won’t be much rabe soon), meat stock made from (albeit plenty of freezer brunt) bones with bird’s nest pasta, a mixed boiled vegetable stew in meat stock, composed of cabbage, potatoes, leeks, and the leftover soup. He prepared eggs a few times, poached on top of peppers and onions, and then again, later in the week, over cabbage. And fish, always fish: whiting, sardines, cuttlefish, and for a special treat, two fillets of sole, which he broiled with olive oil and lemon juice, and served with a simple boiled potato, a green salad, and a glass of white wine.

Achilles, who it seems to have been a man to take on some of the most grueling jobs available in the USA at the time, also laid railroad track on the New York to Philadelphia line. Edward said the men cooked in their camps—one-pot dishes foraged from the surrounding area. It was a form of cooking that Achilles had mastered, and one Edward would carry on, like eggs poached over vegetables. Many of Edward’s pasta dishes reflect this same mentality, and those are the recipes that I’ve come to depend on, to put dinner on the table in a hurry. Smoked pork chops with cabbage is just such a one. 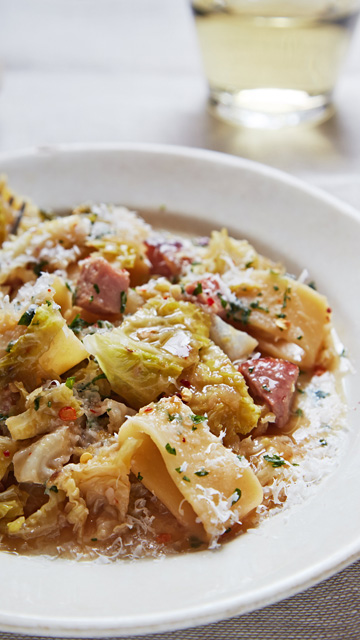 Variation: To make this into a pasta dish (pictured), add 1 cup of chicken stock
at the same time as the pork. Boil ¾ pound of penne or rigatoni, or best,
calamarata pasta until al dente, drain and add to the skillet. Heat the pasta
and sauce together. Garnish with 4 tablespoons Parmesan cheese as well as the parsley.