Schools follow one kind of calendar, accounts another, and Ed Giobbi a third. Our week starts with Friday. That’s when he shops on Arthur Avenue in the Bronx, so that’s when the week of cooking starts.

The week of Feb 21 Edward cooked fish numerous times, as always, mostly over the weekend. When just cooking for himself and Ellie, he broils the fish—this week started with sole—under the salamander with garlic, olive oil, and lemon juice. But over the weekend he had company, and so made a two-course meal. For the antipasto, mussels braised with wine and herbs, fried Maine sardines, and fried squid. These sardines are eaten like corn on the cob: you gently pull the meat off the bones with your lips. You can also grill the sardines and eat them the same way. The sardines are about 6 inches long, and Edward usually buys about 3 per person. He tends toward the smaller fish, both for flavor and cost. And of course, these smaller fish are more sustainable. So whiting, mackerel, sardines, small bass, squid, octopus, and cuttlefish all get good work outs in his kitchen.

For the main course, Edward made rigatoni alla Genovese. I have a recipe in The Kitchen Ecosystem for this wonderful meat and vegetable sauce, but Edward cooks it differently. He lays a layer of beef cut in chunks in a Dutch oven, then a layer of onions, then a layer of carrots, then a pint or two of his home canned tomatoes, and places in a 350F oven for a few hours. In the last 15 minutes he adds partially boiled pasta like rigatoni and continues baking until the pasta is al dente. It’s garnished with Parmesan cheese. That was followed by a blood orange salad and biscotti with vin santo. He’s hot on a biscotti he gets a Tino’s, Prato Belli’s Cantuccini alla Mandorla (18% almonds! says the label).

The following day, Sunday, Edward made braised lamb shanks with blood orange zest, mashed potatoes, and baked rape with dried black olives. This I had to try. Langdon Cook, a fellow mycophile, and author of The Mushroom Hunters, was crashing at my loft while in town to speak to the New York Mycological Society, and as I often do, I made dinner for a small group of club members. The group always includes Gary Lincoff and his wife Irene. Gary is our club scientist, author of the Audubon book of mushrooms, and known in the mushroom world as the Woody Allen of Mycology. He told us all about the founding of the Telluride Mushroom Festival and while I can’t divulge the details I can say that I found it impressive that he remembers anything about it at all. I bought 5 blood oranges and 5 split lamp shanks at Biancardi’s, and made the shanks, which were fabulous, and garnished them with a blood orange gremolata, which I think made it even better. I served the shanks with broccoli rabe with dried black olives, and afterwards a salad of fennel, the fruit of the blood orange, and dried black olives.

Edward used his leftover lamb to make a ragù and served it over polenta for lunch. The leftover polenta was poured into a small pie tin. He sautéed a bunch of onions in olive oil and stirred it into the polenta, and let it rest. Then, in the evening, he sprinkled Parmesan cheese over the polenta with onions and slipped the pie under the broiler.

Most evenings Edward made a vegetable sauté. This week he primarily ate cabbage, potatoes, broccoli rabe, and frozen pole beans from his garden (cooked in a stew with onions and tomatoes), one night he poached eggs on top of the braise, and served it with bruschetta. What is bruschetta? Just toasted Italian bread. But usually it’s flavored up some. The bread is sprinkled with extra virgin olive oil and salt, sometimes rubbed with a raw garlic clove once toasted, or rubbed with a half a raw tomato.

As always, Edward made a couple of soups throughout the week, a cranberry and soy bean soup, served with small pasta, and a Tuscan kale and cranberry bean soup. Turns out that kale freezes well. Blanch the leaves, dry them and freeze. They can be dropped directly into bean soups.  Lunches are always accompanied by a green salad (but not dinner; Edward says salad is hard to digest), dressed with olive oil and Ed’s homemade vinegar. Ed’s homemade wine, cheese from Tino’s; this week, Gorgonzola dolce, followed by dried figs and walnuts.

This is a great dish to do ahead. I made the shanks the day before, defatted the braising liquid and stored it separately. About 30 minutes before service I warmed the shanks on top of the oven in the braising liquid. I made the gremolata fresh, and served it sprinkled over the shanks. The leftover bones and bits of meat made an excellent stock (just covered in water and boiled), which I used to boiled ceci beans in the next day. 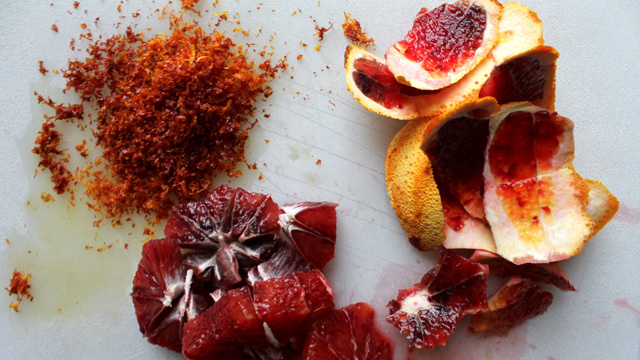 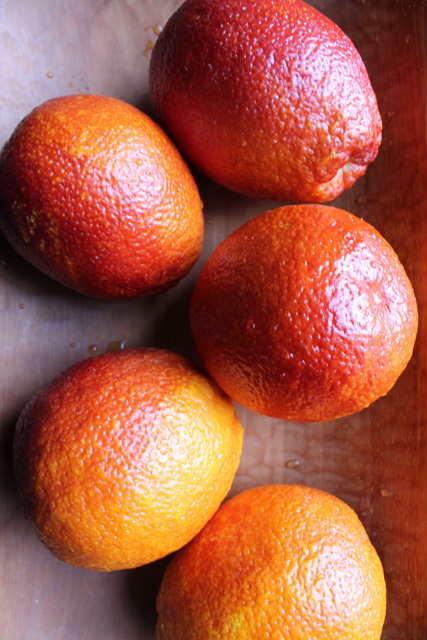